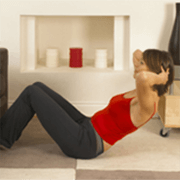 The term “neutral spine” gets thrown around by exercise practitioners early and often. Rightfully so too, it is one of the most important technique points to help prevent lower back pain. But the more it gets used, the broader the term becomes. I too am guilty of berating my clients with this instruction. Since I figure it will be one of the most mentioned terms during treatment, I have dedicated this post to justifying why its such a crucial component of exercise prescription and instruction.

Simply put, “neutral spine” refers to keeping your spine in its strongest position throughout movement.

The spine is at its most vulnerable during loaded trunk flexion. Our spines have become accustomed used to maneuvering with our body weight as its only load. It can therefore protect itself from various movements without an additional external load present. However, if we add such a load and position our spine in a relatively weakened position, damage can occur – lower back pain. The catch is that our muscles need an external load in order to be stimulated enough to get stronger. So we can’t just go through life without ever adding a load. So the compromise is we maintain neutral spine whenever there is a load added.

Often coordination and self awareness can allow you as the exerciser to maintain a neutral spine at all times. However, in the case that it is a client or a partner who needs feedback it can prove to be even easier. There are many coaching points and cues that can help you maintain a neutral spine during a resisted (or loaded) movement. Here are some:

“Proud Chest” – If you stick your chest out and have it lead the way this will often ensure that your spine stays in a nice, neutral position “Straight back” – often just reminding the client to focus on the spine position can go a long way. “Strong back” – as above, just highlights the spinal position to the exerciser. “Shoulders back” – Similar to the “proud chest” cue

By placing your hand in the small of someone’s back during a movement they can ensure there is a natural curvature of the lumbar spine. Tactile cues are most useful during holding exercise rather than repetition exercises.

Probably the most effective feedback mechanism, however often difficult without a second person watching and correcting. Its quite easy to observe whether someone’s spine is in a neutral position or not. I don’t advise using a mirror to use visual cues during your own loaded movement. If you are alone then consider filming yourself to get great visual feedback.

Now that neutral spine is defined be sure to consider it during movements that add a load on the trunk. Don’t let it cause you to be rigid or nervous, but allow yourself to be aware enough in order to maximise the effectiveness of a given exercise and prevent injury. It can also be helpful to practice keeping your spine in neutral during incidental tasks such as sitting in a chair, driving a car and while walking around the house. Practice makes perfect.