I know, the title looks like yet another dodgy clickbait headline that exaggerates but falls short after you dive in.

Except this one doesn’t!

I saw it with my very own eyes!

In the clinic, Danny sat across from me. He was relaxed because he wasn’t the one that was there to see me, he was just there to support his wife. As we talked I told them about my journey to losing weight and improving my health while maintaining my awesome relationship with food. I could tell that Danny could relate to that food love. I told them about my dad’s diabetes and how I was determined to avoid the condition for myself. As it turns out he is also a diabetic!

Whenever I talk with a client who is interested in weight loss or diabetes management, I suggest checking their blood sugar to help illustrate how they can help themselves manage their health. So they agreed.

Now the man of the hour. 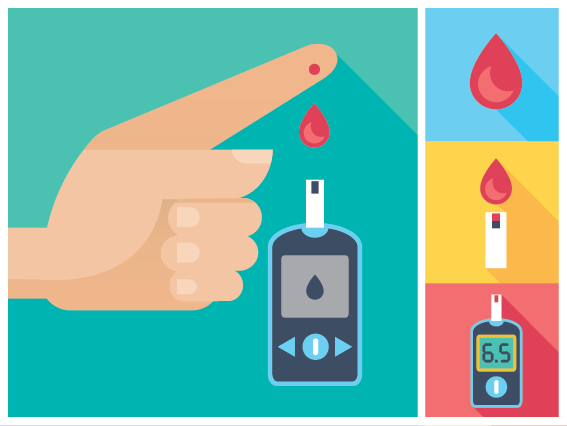 What!? That can’t be correct. 20.9!! That’s the highest reading I’ve ever seen. Since he’s diabetic, he knows he’s in trouble. As expected, I’m the least of his worries. His misses glares across at him.

“WHAT DID YOU EAT TODAY!?” She asks furiously.

Turns out that he had just downed a 2L bottle of juice as well as hitting KFC for lunch after work. The last few days weren’t much better either!

I didn’t really know what to say. He already knows he’s diabetic, he’s seen the doctor as well as a dietitian in the past. How do I convey the seriousness of this to him? How can I make this moment the one that facilitates improvement. Do I yell? Do I just shake my head in shock?

I took a deep breath and started to teach him about his biology & physiology. Why having blood sugar that high is dangerous, what happens on the inside when his sugar spikes, what the potential complications could be down the track.

I asked them both to make a decision. Today is the day that we reset and rethink what we know as “normal”. I gave them some resources about ways to lower their carbohydrate intake without starving themselves. They can still go to the same places (for now) but what they choose to put in their mouths has to be different. It had to be.

We did a bit of exercise and they were off. I asked them to go grocery shopping and read the labels on their foods following certain guidelines that we use in “the activate plan.” I would check in with them in a week and retest their blood and see how they went.


The next week came around and Danny and Mrs Danny came for their next visit. They quickly confessed that they hadn’t managed to go shopping until just last night. But they had thrown out the juice and some of the sweets they had at home. They showed me some pictures of foods they found at the supermarket and asked for feedback. Great, everything looked good.

I was anxious to check their blood sugar. Having admitted that they didn’t really make much of a change I was concerned that it would still be ridiculously high. The first and second visits are the most critical for me to get long term results. I need the desire to change to happen early on to increase the adherence.

Danny went next. 6.3 mmol/L. Awesome. Still a little high but nothing like the week before. His wife gave him a slow nod of approval. The relief on his face was very clear. I reiterated that it was still high but whatever he had done this week had actually made a tangible difference to his physiology.

Although he had not really started and made a big change he had cut out the fruit juice from his rotation (and impressively got rid of 6 bottles he had purchased on sale), he also made some better decisions without actually making any drastic changes.

Now that Danny had seen the effect of his choices and that his body & blood results were objectively showing us what was happening, he was ready. I pushed him fairly hard on the exercise getting him quite tired through a whole body workout. I don’t always enjoy pushing someone but Danny loves the tough love in the gym. His motivation magnifies when I let him know that his muscles will take in the sugar that’s floating in his blood.

Filled with new motivation, Danny & Mrs Danny went off for their first week with a healthy supply of groceries and exercise on their minds. Fingers crossed they’re able to maintain their choices all week.

The next week came around quickly and I was anxiously counting down the minutes until their appointment. I was pleased to get a quick, reassuring thumbs up from them both as I finished with the person before them. They must have had a good week.

They eagerly waited in front of the scale so I knew they must be expecting some progress. Pressure’s on now.

They proudly start to tell me about their week and the small victories they’ve had individually and together. Mrs Danny teases him about how much weight she lost and that she “beat him.” All in good spirit.

He quickly turns to his wife and starts dishing back how he was the real winner! Her sugar had dropped too but she started off much lower than him anyway. I loved every single second of that moment.

I watched a diabetic man gain hope in just 2 weeks. He finally believed that he could do something about his health.

It’s one thing to be told…do this, do that and you will be healthier, live longer bla bla bla. If it’s going to take me 60 years to figure out if your tactics worked or not then I’ll easily give in to every temptation. I encouraged Danny that he could realistically go into diabetic remission if he keeps it up!

How are you feeling Danny?

This is just the beginning of the journey. I have given Danny the goal of trying to keep his sugar this low with a combination of diet & exercise for 1 month when he’s due for another blood test that tests his HbA1c (average blood sugar over a 3 month period). I’m optimistic that he’s made a lasting change for himself & his family.

Danny is a real person but his name has been changed for his privacy. If you are a diabetic or know someone who is and feels helpless to improving their lifestyle then please share this with them. Or even better, chat to us using the blue button in the bottom right corner and let us help you create your own amazing story.